Delta Variant Reveals Folly of Normalcy in Return to Office

With vaccine efficacy against the Delta variant falling by 39%, normal return to office plans are pure folly. There is no denying the peril that lies in wait: the Delta surge is projected to escalate further in the months ahead. The Centers for Disease Control and Prevention (CDC) is requesting vaccinated people to wear masks, and it is likely to promote booster shots soon.

Still, a lot of large companies, mid-size firms, and even the federal government are compelling unwilling employees to return to the office. More than a third of those who worked remotely during the peak of the pandemic have already complied. A majority of the remainder are expected to follow by the end of August or early-mid fall, just when schools reopen – and this will happen despite Delta infections are forecast to explode.

So why do companies such as Apple, Xerox, JPMorgan, Goldman Sachs, American International Group, and Abbott Laboratories, not to mention the federal government, insist on exposing their employees to such serious health risks?  What motivates them to herd employees towards becoming a part of the Great Resignation induced by the pressure of going back to the office?

In-depth surveys showed what employees want if they were asked to return to the office. Even before the Delta issue came up, about half intended to quit if their desired working preferences were rejected. The surveys revealed that 25% to 33% of employees preferred full-time remote work. Meanwhile, over 50% favor a hybrid schedule with a day or two spent on company premises.

Many have quit due to the ill-advised plans of employers to get them back in the office. The threat of the worrying Delta surge will clearly trigger more resignations as employees become fearful of breakthrough infections.

Numerous large employers fail to listen to their employees’ concerns because of dangerous judgment errors called cognitive biases. These mental blindspots, which often lead to wishful thinking, result in poor strategic and financial decisions when evaluating options. They render leaders unable to resist following their gut and their personal preferences instead of relying on best practices on returning to the office.

The normalcy bias leads people to significantly underestimate the Delta surge. We mistakenly dismiss the probability and consequences of disruptive events because of this perilous judgment error.

It was already clear that US Delta cases were starting to rise in early June. There was also clear evidence that countries with high vaccination rates, like the United Kingdom and Israel, were experiencing a surge in cases in May.

While big employers would like to think that they were making data-driven decisions, they have obviously ignored the data. And they’re unable to say that they weren’t warned about the rising COVID infections. Even while being aware of the increasing danger, they still pushed for a return to the traditional office setup.

The planning fallacy is another blindspot that causes havoc. It prods leaders into setting optimistic yet unrealistic plans and resist changing them despite new evidence proving them wrong. After all, reversing a decision suggests that you were wrong to begin with. Weak leaders habitually refuse to own their mistakes and ignore the need to alter plans. By contrast, strong leaders show courage when new evidence shows a necessity to redirect.

Although a handful of companies revised their return to office plans based on the Delta surge, many changes were temporary fixes rather than true pivots. For example, Apple delayed its return to the office from September to October. Unfortunately, this one-month delay shows that it did not grasp the gravity of the situation.

Aside from forecasts that Delta cases will surge in October, there is a more pressing problem to consider. Employers need to face the reality that vaccine immunity wanes after a few months. Additionally, new variants are aggravating the situation. For instance, Delta Plus appears to be just as infectious as Delta, but more resistant to vaccines

While the Delta variant may be a short-term issue, it comes with multiple similar scenarios as part of the long tail risk of new waves due to other variants. Research on why Boards of Directors fire CEOs shows denying such negative reality as one of the top reasons. This denial is due to another cognitive bias, called the ostrich effect. It is based on the mythical notion of ostriches burying their heads in the sand when facing danger.

Defeating cognitive biases to ease into a successful return to the office requires the use of research-based best practices. It means a mainly hybrid model of one to two days in-office while permitting most employees to work remotely as needed. A substantial minority of employees should work full-time remotely if they are reliable and productive. That setup helps facilitate an easy way to shift to full-time work from home for all staff if need arises, by creating a culture and systems and processes that facilitate remote work. This best-practice setup will translate to diverse benefits: optimization of in-office collaboration, retention of top talent, and the creation of flexible company culture, systems, and processes.

Employers must recognize the challenges from initial experience on the COVID outbreak. This will prevent entrapment with mental blindspots, as Delta and other variants emerge, turning their back on their employees…> Click to tweet 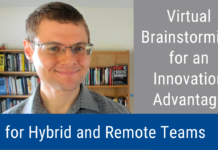 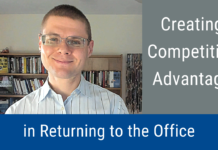