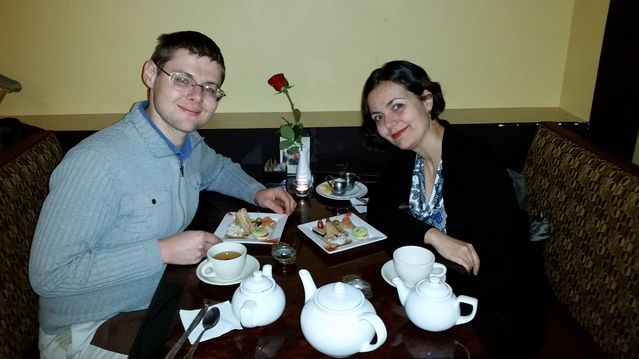 Last year, my wife gave me the most romantic Valentine’s Day gift ever.

We had previously been very traditional with our Valentine’s Day gifts, such as fancy candy for her or a bottle of nice liquor for me. Yet shortly before Valentine’s Day, she approached me about rethinking that tradition.

Did candy or liquor truly express our love for each other? Is it more important that a gift helps the other person be happy and healthy, or that it follows traditional patterns?

Instead of candy and liquor, my wife suggested giving each other gifts that actually help us improve our mental and physical well-being, and the world as a whole, namely donating to charities in the name of the other person.

She described an article she read about a study that found that people who give to charity feel happier than those that don’t give. The experimenters gave people money and asked them to spend it either on themselves or on others. Those who spent it on others experienced greater happiness.

Not only that, such giving also made people healthier. Another study showed that participants who gave to others experienced a significant decrease in blood pressure, which did not happen to those who spent money on themselves

So my thoughtful wife suggested we try an experiment: For Valentine’s Day, we’d give to charity in the name of the other person. She said that for the same amount of money we would get back something much more rewarding. This way, we could make each other happier and healthier and help other people at the same time, doubling the impact of spending the same money. Moreover, we could even improve our relationship. Three birds with one stone!

I accepted my wife’s suggestion gladly. We decided to donate $50 per person, and keep our gifts secret from each other, only presenting them at the restaurant when we went out for Valentine’s Day.

While I couldn’t predict my wife’s choice, I had an idea how she would make it. We’ve researched charities before, and wanted to find ones where our limited dollars could go as far as possible toward saving lives. We found excellent charity evaluators that find the most effective charities and make our choices easy. Our two favorites are GiveWell, which has extensive research reports on the best charities, and The Life You Can Save, which provides an Impact Calculator that shows you the actual impact of your donation. These data-driven evaluators are part of the broader effective altruism movement that seeks to make sure our giving does the most good per dollar. I was confident my wife would select a charity recommended by a high-quality evaluator.

On Valentine’s Day, we went to our favorite date night place, a little Italian restaurant not far from our house. After a delicious cheesecake dessert, it was time for our gift exchange. She presented her gift first, a donation to the Against Malaria Foundation . With her $50 gift in my name, she bought 20 large bed-size nets that would protect families in the developing world against deadly malaria-carrying mosquitoes. In turn, I donated $50 to GiveDirectly, in her name. This charity transfers money directly to recipients in some of the poorest villages in Africa, who have the dignity of using the money as they wish. It is like giving money directly to the homeless, except dollars go a lot further in East Africa than in the United States.

We were so excited by our mutual gifts! They were so much better than any chocolate or liquor could be. We both helped each other save lives, and felt so great about doing so in the context of a gift for the other person. We decided to transform this experiment into a new tradition for our family.

It was the most romantic Valentine’s Day present I ever got, and made me realize how much better Valentine’s Day can be for myself, my wife, and people all around the world. All it takes is a conversation about showing true love for your partner by improving her or his health and happiness, as well as global flourishing. Is there any reason to not have that conversation?

Does the Starbucks Anti-Bias Training Go Against Human Nature?