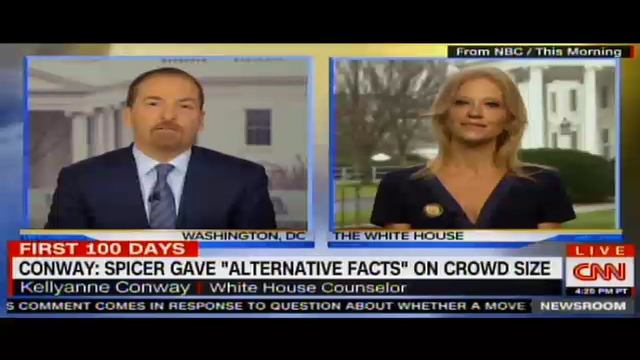 I shuddered, horrified to the depths of my soul when Donald Trump’s senior adviser Kellyanne Conway presented the Trump administration’s false claims as “alternative facts” in a January 22nd interview on NBC’s “Meet The Press.” She was defending the lies told by Sean Spicer, the White House Press Secretary, about Trump’s inauguration. For instance, Spicer stated that Trump drew “the largest audience to ever witness an inauguration,” despite the clear evidence of aerial photos (and metro usage statistics) showing that Barack Obama’s inauguration drew significantly bigger crowds.

Yet are alternative facts really so bad? While I had a violent visceral reaction to hearing Conway utter the words “alternative facts,” my response simply indicates an emotional distaste for deceit. I would have that response regardless of whether a Democrat or Republican used that phrase.

Many share my sentiments. Prominent columnists are condemning Conway for appealing to “alternative facts.” There are calls for Sean Spicer to resign based on his lies, and internet memes featuring “alternative facts” are spreading quickly.

However, this criticism only speaks to people who share my intuitive orientation toward truth, reason, and logic. Research shows that plenty of people resonate more with appeals to emotions rather than facts. They do not see an inherent problem when the politicians that they support lie to gain political credibility.

Their more emotionally-oriented perspective explains Trump’s successful appeal to emotions such as fear and anxiety. Trump won the presidency in part through such post-truth tactics. Trump’s victory was a major reason why Oxford Dictionary chose “post-truth” as its 2016 Word of the Year, defining post-truth as “relating to or denoting circumstances in which objective facts are less influential in shaping public opinion than appeals to emotion and personal belief.”

How do we get across to people the dangers of post-truth political tactics, whether perpetrated by Trump or others, if they do not have a visceral concern about truth in politics? Just wagging a finger and calling out such lies, as many in the press are currently doing, will not work. This approach is characteristic of a typical thinking error, termed the “false consensus effect” in psychology, where we intuitively assume other people share our emotional predispositions and values.

The underlying challenge stems from people who respond most strongly to emotional appeals rather than facts. As an example, due to Trump’s harsh and emotional criticism of mainstream media when they called him out on his deceit, trust in the mainstream media among Republicans dropped by over half from 2015 to 2016. Trump’s followers resonate with his emotional appeal, trusting him at the gut level, regardless of the actual facts of reality.

As a scholar and commentator who has studied decision-making and emotions in politics extensively, I set out to learn how to reach those who do not intuitively emphasize factual truth in arriving at an opinion. Based on research in political psychology, I hypothesized that the surest way is to discover what such people care about and show them how post-truth politics will undermine what they value. The most promising avenue in my investigation has proven to be demonstrating how “alternative facts” will result in corruption and authoritarianism, one of the top fears of Americans, according to a Chapman University 2016 study.

I focused on talking to Republicans in particular, conveying the idea that if politicians can win just by telling the best lies, they do not need to care about serving the true interests of the citizenry. They could simply use emotional manipulation and lies to get and stay in power, paving the way for corruption and authoritarianism.

Indeed, without the truth about the influence of money in politics, citizens cannot evaluate who is corrupt. As Secretary of State John Kerry noted at an Anti-Corruption Summit in May 2016, “corruption tears at the entire fabric of a society.” President Barack Obama has taken a series of steps to address government corruption through regulations increasing transparency in business and politics. Trump’s plans to roll back regulations will reverse this transparency.

I also discussed how rhetoric that appeals to emotions and popular beliefs is a foundational feature of authoritarianism. This is the same kind of rhetoric that helped Vladimir Putin transform Russia’s post-Soviet fledgling democracy into an authoritarian state, and resulted in Putin’s consistently high popularity rating, something that Trump praised in a televised forum with Matt Lauer.

Trump also positively depicted Putin’s “strong control over a country,” and when asked on MSNBC’s “Morning Joe” what he thought of Putin killing journalists who do not agree with him, Trump dismissed that question, saying that: “I think that our country does plenty of killing, too, Joe.” Given that Putin began his path to authoritarian rule by undermining the Russian media, and that Trump promised to do the same in the US if elected, and is indeed carrying out this promise, the parallel is clear.

Moreover, I talked about the possibility of Trump borrowing another of Putin’s favorite tactics: fraudulent elections. Imagine, I told them, Trump losing the 2020 election, and then blaming that loss on supposed millions of illegal votes, as he has already done in his false claims immediately after the election that he won the popular vote in 2016 – a lie that, according to polling, a majority of his followers believe. He continues to make these deceptive statements, most recently in his first meeting with congressional leaders on January 23, despite prominent members of his own party, such as Paul Ryan, pushing back against these lies.

Trump is surrounding himself with allies who promote similar lies. For instance, we know that Trump’s pick for Attorney General has tried to suppress voting through prosecuting African-American activists for voter fraud, unsuccessfully, and more broadly promoting the false idea of widespread voter fraud among African-Americans and other minority groups. It is not at all unlikely that if he lost in 2020, he would make claims of voter fraud, and have people such as his Attorney General make up fake evidence demonstrating fraud.

Clearly, Trump has little respect for American democratic institutions. After all, back when he thought he was losing the 2016 election season, he was already making the case for the elections being rigged. If he actually lost the 2020 election, and had all the might of the presidency behind him, it is not unlikely that he would go the extra step to make up evidence to support his lies. If he succeeded in staying in power despite the will of the electorate, his actions would spell doom for American democracy.

While American political institutions are more stable than Russian ones, we should be very worried. Without intervention, our situation will only worsen. Other politicians are already learning from Trump’s post-truth approach to politics. They will try to out-Trump Trump, competing based on who tells the most emotionally provocative and appealing lie, not on who will best serve the common interest.

To demonstrate the effectiveness of my approach, I went on a radio show whose host, Dwight Lilly, is a Republican activist. The reasoning I used appealed to what Lilly and his listeners cared about – corruption and authoritarianism. We had a very productive conversation where he and I agreed about the dangers of post-truth politics and the importance of not taking any claims at face value, and instead demanding credible evidence. In my post-show, informal discussion with him, Lilly said that our conversation really made him think and “that’s a dangerous thing,” in his words.

Caption: Meme with message meant to help people see the nonpartisan nature of truth “THE TRUTH IS NOT PARTISAN” (Courtesy of Lexie Holliday, made for Intentional Insights)

Given that he has a wide following of, and represents, other Republicans with libertarian leanings, the approach I outlined seems quite promising for getting people like him and others to care about fighting post-truth politics. The key is to determine what such people do care about, and show them that “alternative facts” will, in the end, destroy what they value. Doing so will enable us to form an alliance across the political spectrum to fight for truth in politics, in letter and spirit, for the sake of preserving our democracy and preventing us from sliding down into corruption and authoritarianism.

P.S. Tired of lies in politics? Take the Pro-Truth Pledge, a research-based strategy to get politicians and other public figures to tell more truth and less lies!